The meiofauna research at the Marine Biology Station started back in 1976. Meiofauna is an ecological unit, defined by formal size fraction between 38 μm mesh size as lower limit and 1000 μm as upper limit. The permanent meiofauna is composed of various higher taxa, among which the most abundant are Nematoda and Harpacticoida. The majority of recognized marine phyla have meiofaunal representatives. This group is characterized by a short life span and a fast reproduction cycle. Moreover, the meiofauna is very effective in utilizing a wide variety of available food resources and can be bottom-up controlled by the concentration of food. This makes them good indicators of pollution.

In addition to the taxonomy of harpacticoid copepods, starting from 2006 we also carried out laboratory experiments with stable isotopes (13C) to track the trophic links through the food web (natural isotopic composition and enrichment in the laboratory).

Research meiofauna is are focused primarily on four areas:

§  the impact of fish farming on meiofauna

§  meiofauna in the food web

§  impact of anoxia on meiofauna and

► Within the project “Low dissolved oxygen events in the Northern Adriatic: in situ experimental insights into benthic responses before, during and post-anoxia“ our role was to assess the impact of anoxia on meiofauna. The impact of anoxia and related geochemical processes on the mortality rates of copepods was assessed by inducing anoxia in several 50x50x50 cm plexiglass chambers placed in situ on the soft sediment, at 24 m water depth in the North Adriatic, Mediterranean. First, two techniques to enumerate copepods were compared: labeling with CellTracker Green (CTG), a vital fluorogenic probe developed to stain only living cells/animals, and staining with the more traditional, non-vital biological stain Rose Bengal (RB). The latter significantly overestimated the number of living copepods because it also marked freshly dead but not yet decomposed individuals. The CTG approach better resolved the initial, fine-scaled processes during evolving anoxia. Secondly, short-term (few days) and long-term (few months) impacts of anoxia on the copepod community were examined. The copepod family Cletodidae (various species from the genera Cletodes, Stylicletodes, Enhydrosoma and Acrenhydrosoma) survived 1 to 2 months of anoxia. They were the true “winners” of the experimentally induced anoxia. When oxygen again became available after the treatments, the number of gravid females increased significantly. This finding implies that substantial energy is allocated to reproduction in the recovery phase. Beyond being highly resistant to anoxia, all species of the Cletodidae are also very resilient. This underlines the strength of species-based response analyses. Nonetheless, there was little short-term immigration into the experimental plots from the surrounding sediment.
Finally, a laboratory tracer experiment with 13C prelabeled diatoms as a food source for copepods was conducted to test whether copepods continue or stop feeding during hypoxia and short-term anoxia. Anoxia considerably reduced the grazing pressure on diatoms as copepods stopped feeding. Accordingly, anoxia affected the survival of both the consumers (direct effect) but also of primary producers (indirect effect), which has important implications for the recovery phase.

► Within the framework of the 6th EU project ECASA (Ecosystem Approach to Sustainable Aquaculture) we evaluated the ‘Impact of fish farm on meiofauna in the Bay of Piran’. It was shown that meiofauna densities and diversities were negatively impacted under fish cages, but not in terms of biomass. At around 20 m to 100 m, no effect of the fish farm was observed. This is in agreement with previous studies revealing that sedimentation of the fish pellets is restricted to within 20 m distance from a cage, taking in account the depth of the site (13m) and the prevailing currents. Only in one direction (NorthEast) from the fish farm, the impact was still observed at 20m, presumably due to the currents, which prevail in that direction. Diversity of harpacticoid copepod species is lowest just under the fish cage, and is increasing towards the control (100 m). Under the cage the copepod assemblage mainly consisted of representatives of one species of genus Bulbamphiascus, that dominated the community in 75%. The representatives of this species have a relatively high individual biomass, significantly higher than harpacticoid copepod species that are present at control location. At 20 m distance from the farm (direction NE), the impact was still observed, not on diversity of harpacticoid copepods, but rather on their individual biomass, which was still high. The presence of fish farms also affects the isotopic composition of the sediment and the animals under the farm. The natural stable isotope signals showed more depleted δ13C values for the sedimentary organic matter (OM) under fish farm cages than at the reference site (-24.42 vs. -21.82 ‰) at about 100 m away from the cages. The most abundant meiofauna taxa (nematodes, copepods), likewise the sedimentary organic carbon, had more depleted δ13C values at the fish farm versus the reference site. The extremely depleted value of harpacticoid copepods points to the use of a very negative (isotopically light) food source, potentially bacteria.

► In the context of targeted research project “Detrmining biological and ecological characteristics and seasonal dynamics of certain commercially important fish species in the Portorož Fisheries Reserve”, we observed that in Portorož fisheries reserve the maximum wild fish density is around the fish farm, because the structure of the fish farm and excrements of fish attract the wild fish population. By analyzing stomach contents of wild fish we have proved that the diet of golden gray mullet (Liza aurata) and partially also the sea bass (Dicentrarchus labrax) is composed of meiofaunal organisms in summer. In the stomachs of wild sea bass we found fish food pellets (used to feed the farmed sea bass). Further genetic analyses need to be performed to confirm whether the seabass caught are representatives of the "wild" populations or escaped from the fish cages.

Experiment with anoxia generating chamber placed in situ at 24m depth, left: sediment and macroepifauna at the beginning of the experiment, right: sediment, macroepifauna and macroinfauna after 7 days of chamber closure in anoxic environment 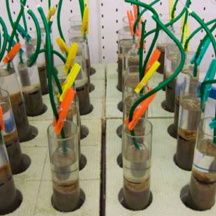 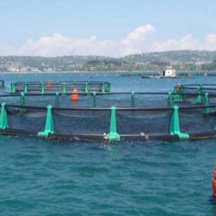 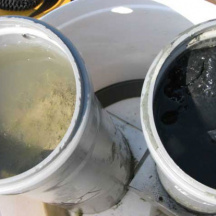 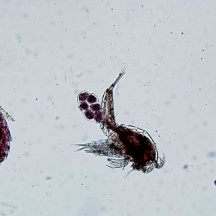 Variety of copepod species. Note the egg sac on female copepod in the middle

All photos were taken by M. Grego, except Microcosm experiment by V. Bernetič