Oceans and seas represent the largest part of the Earth’s biosphere and marine microbes are the most abundant group of organisms, capable of growing in all marine habitats. Microbes are the key players in marine food webs and are involved in all biogeochemical cycles. The central focus of our research is to study the impacts of variable supply regimes of different inorganic and organic matter on the function and diversity of the microbial communities, mainly Bacteria and Achaea, in shallow enclosed coastal marine ecosystems. Oceanographic properties are strongly affected by water mass exchange, river inflow and meteorological conditions, which influence the microbial community composition and function.

Our recent and ongoing projects are especially focusing on the microbial community response to changes of physiochemical environmental parameters, phytoplankton blooms, massive gelatinous zooplankton outbreaks and accumulations of organic matter (i.e. marine snow, macroaggregates).Furthermore, we are investigating the response of marine microbial communities to different source of anthropogenic pollutants.

The potential link between the microbial dynamics and the environmental parameters was investigated in a semi-enclosed and highly dynamic coastal system (Gulf of Trieste, northern Adriatic Sea). Our comprehensive 2-year time-series study showed that despite the shallowness of this area, there was a significant difference between the surface and the bottom bacterial community structure. The bottom bacterial community was more diverse than the surface one and influenced by sediment re-suspension. The surface seawater temperature had a profound effect on bacterial productivity, while the bacterial community structure was more affected by freshwater-borne nutrients and phytoplankton blooms. Our results propose the importance of the water mass movements as drivers of freshwater-borne nutrients and of allochthonous microbial taxa. This study emphasizes the prediction power based on association networks analyses that are fed with long-term measurements of microbial and environmental parameters. doi:10.1111/1462-2920.12519. http://onlinelibrary.wiley.com/doi/10.1111/1462-2920.12519/abstract;jsessionid=67C0A7EA14C461019144A63D24F58EEA.f03t02

In order to obtain insights into the coupling between community composition, diversity and community function, bacterioplankton assemblages from the northern Adriatic Sea were exposed to increasing environmental pressure (decrease of temperature, the addition of phosphorous and the decrease of oxygen level) in continuous seawater cultures to construct communities differing in composition and diversity. Denaturing gradient gel electrophoresis and pyrosequencing of bacterial 16S rRNA genes showed reductions in bacterial diversity. Nevertheless, no differences in the ability to exploit dissolved organic carbon  were found for the acquired communities relative to the inoculum, indicating that the bacterial communities were functionally redundant. doi: 10.3354/ame01660  http://www.int-res.com/prepress/a01660.html

The episodic hyperproduction of mucilage macroaggregates in the northern Adriatic Sea creates an important site for the accumulation, transformation, and degradation of organic matter. The structure and function of macroaggregate components in relation to their macrogel and colloidal fractions was discussed in paper doi: 10.3354/ame01447. The determination of biofilm architecture, particularly the spatial arrangement of microcolonies, has profound implications for the function of these complex communities. High resolution electron microscopy showed a very complex structure, a honeycomb-like structure of the mucus macroagregates. The majority of carbohydrate and protein macroaggregate pools are usually degradable, while the great majority of lipids can be preserved.

The discrepancies between bacterial ectoenzyme potential activities and biogeochemical degradation processes were further intensively studied in 64-day mesocosms experiment. Extensive biogeochemical parameters, processes and community composition were measured after addition of inorganic phosphorous to natural microbial population. Variation in bacterial ectohydrolase activities on aggregates, regulating the rates of particulate →dissolved organic matter transition as well as dissolved polymer hydrolysis, suggests that this could be a bottleneck in phosphorous  regeneration. This could be another regulatory step, in addition to alkaline phosphates (APase), in the microbial regulation of P cycle and the coupling between C and P cycles. doi: 10.1016/j.scitotenv.2013.10.040; http://www.sciencedirect.com/science/article/pii/S0048969713011844

Interaction among microbes and other planktonic organisms

Bacteria and metazoan zooplankton (mainly crustaceans) are often viewed as two separate functional groups in the pelagic food webs indirectly linked via nutrient cycling and trophic cascades. Zooplankton bodies are organic-rich microenvironments that support fast bacterial growth. Our review publication focuses on zooplankton as an important and unique microhabitat for many pelagic bacteria, onthe interactions between these two components, and points to the future challenges and opportunities in this research field. doi: 10.3354/ame01424.

Jellyfish blooms have increased in coastal areas around the world and the outbreaks have become longer and more frequent over the past few decades. The Mediterranean Sea is among the affected regions and the common bloom - forming taxa are scyphozoans Aurelia aurita s.l., Pelagia noctiluca, and Rhizostoma pulmo. Jellyfish have few natural predators, therefore their carcasses at the termination of a bloom represent an organic-rich substrate that supports rapid bacterial growth, and may have a large impact on the surrounding environment. We conducted several in situ jellyfish - enrichment experiment with different jellyfish species and in different jellyfish occurring ecosystems (The Gulf of Trieste – northern Adriatic, The Big Lake on the Mljet Island – southern Adriatic, the Gelendzik - Black Sea). The biochemical composition of jellyfish species may influence changes in the amount of accumulated dissolved organic and inorganic nutrients, as well as oxygen concentrations. doi: 10.1007/s10750-010-0223-x.

Our results show that jellyfish biomass is characterized by protein rich organic matter, which is highly bio available to ‘jellyfish - associated’ and ‘free - living’ bacteria, and triggers shifts in bacterial population dynamics and composition. The results of sequence analyses of bacterial isolates and of total bacterial community determined by culture independent genetic analysis showed shift from Alphaproteobacteria to Gammaproteobacteria and Flavobacteria and the dominance of the Pseudoalteromonadaceae and the Vibrionaceae families. doi: 10.1371/journal.pone.0039274 http://www.plosone.org/article/info%3Adoi%2F10.1371%2Fjournal.pone.0039274,

The impact of the scyphomedusa Aurelia sp. on planktonic assemblages was experimentally studied in enclosures incubated in situ in the sea lake of Mljet Island (southern Adriatic). A reduction in abundance for small calanoid and cyclopoid copepods, copepodites, nauplii and ciliates was observed in the presence of Aurelia sp. In addition to direct predatory pressure, Aurelia sp. exerted an indirect cascading effect on autotrophic and heterotrophic microbial plankton. The top-down effect of predation, along with material release by Aurelia sp. results in increases in microbial biomass and production. (Turk et al. 2008)

Populations of Noctiluca scintillans were compared in the northeastern-central Black Sea and the northern Adriatic Sea. Seasonal changes in cell abundance demonstrated a regular annual maximum with the peak in May–June with additional sporadic peaks in other seasons. The concentration of the eggs of Calanus euxinus was significantly positively correlated with abundance of Noctiluca and the possible effect of a high concentration of copepod eggs on the growth of Noctiluca is discussed and that its outbursts during the peak period are controlled by the wind. http://dx.doi.org/10.1016/j.hal.2014.01.004
Response of microbes to anthropogenic impacts and different organic pollutants

Response of microbes to anthropogenic impacts and different organic pollutants

Because of their positive characteristics and benefits, bioplastic or biodegradable polymers are considered to be a viable alternative to conventional plastics. The biodegradation of bioplastic in the presence of different microbes was evaluated under diverse conditions in laboratory and marine environment. http://www.ciesm.org/online/archives/abstracts/pdf/40/index.php.

The risk posed by complex chemical mixtures in the environment to wildlife and humans is increasingly debated, but has been rarely tested under environmentally relevant scenarios. To address this issue, two mixtures of 14 or 19 substances of concern (pesticides, pharmaceuticals, heavy metals, polyaromatic hydrocarbons a surfactant, and a plasticizer), each present at its safety limit concentration imposed by the European legislation, were prepared and tested for their toxic effects. The effects of the mixtures were assessed in 35 bioassays, based on 11 organisms representing different trophic levels. A consortium of 16 laboratories was involved in performing the bioassays. doi: 10.1093/toxsci/kfu118; http://toxsci.oxfordjournals.org/content/early/2014/06/23/toxsci.kfu118.abstract?sid=d8381fd4-bf03-4904-92c7-b67ce34bb084 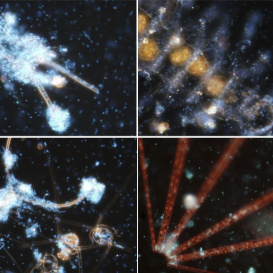 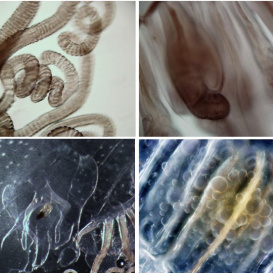 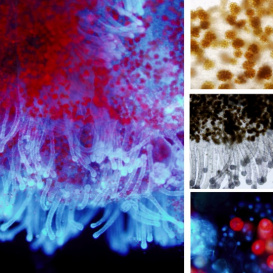 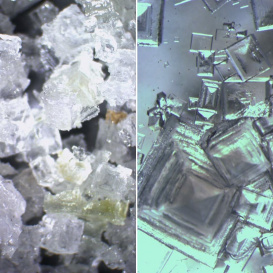 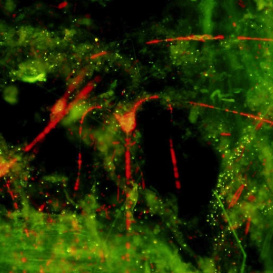 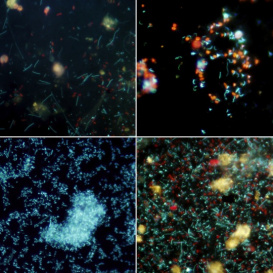