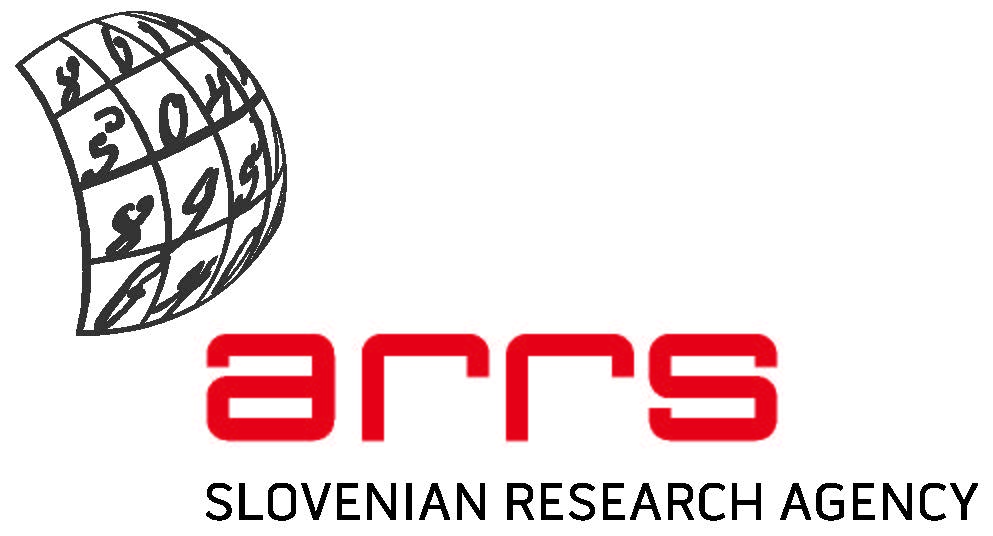 Advanced 3D cell models: Bridging the gap between in vitro and in vivo experimental systems (hep3DGenTox)

The authors acknowledge the project J1-2465 was financially supported by the Slovenian Research Agency.

Abstract
According to the current legislation genotoxicity testing is obligatory for new chemicals and products such as drugs, cosmetics, additives, pesticides etc. The international regulations for genotoxicity testing require in the first stage a battery of in vitro tests with bacteria and mammalian cells, and when positive results are obtained follow-up in vivo experiments are conducted. According to the proposed strategy of the EU Reference Laboratory for Alternatives to Animal Testing (EURL ECVAM) to “Avoid and Reduce Animal Use in Genotoxicity” can be achieved by enhancing the performance of the in vitro testing battery and by developing improved in vitro experimental models so that fewer in vivo follow-up studies are necessary.

It has been estimated that approximately 80 % of in vitro genotoxicity tests in the EU are false positives and consequently, a high number of experimental animals is sacrificed, which could be avoided by more reliable in vitro test systems. An important reason for the false positive results obtained with current in vitro tests conducted in two-dimensional (2D) cell models is the lack of phase I and II metabolic enzymes that catalyse the activation and detoxification of genotoxins. Therefore it is essential to develop improved in vitro cell-based systems that will more realistically mimic the in vivo cell behaviours and will provide more predictive results to in vivo conditions. In this respect, three-dimensional (3D) cell cultures have gained increasing interest due to improved cell-cell and cell-matrix interactions and preserved complex in vivo cell phenotypes. Moreover, hepatic 3D cell models exhibit higher level of liver-specific functions including metabolic enzymes compared to 2D models. However, despite obvious advantages 3D systems have so far not been developed and validated for genotoxicity testing. Therefore the aim of hep3DGenTox project is to develop advanced physiologically more relevant human 3D in vitro cell models with improved hepatic characteristics and increased metabolic capacity. In the project we will develop spheroids from human hepatic cell lines under static (forced floating method) and dynamic (bioreactors) conditions as well as on bio-printed scaffolds prepared from various biocompatible materials. The most promising newly developed 3D in vitro models will be characterised (cell growth, expression of metabolic phase I and II enzymes at gene and protein level etc) and validated for genotoxicity testing using chemicals from the ECVAM list developed by an expert group working on the validation of new in vitro genotoxicity tests. We expect that more reliable results (i.e. less false positives) will be obtained with the newly developed hepatic 3D cell models. Because of this their use in genotoxicity testing will contribute substantially to the reduction of the use of laboratory rodents and to a more reliable safety evaluation of chemicals and products that is needed for efficient human health protection. Furthermore the advanced 3D in vitro cell models will be useful for acute and chronic toxicity studies. 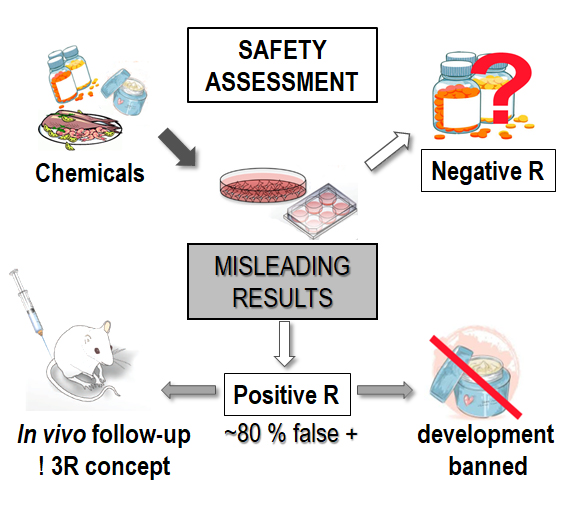 Objectives
The overall aim of the hep3DGenTox project is to develop advanced, physiologically more relevant human 3D in vitro cell models with improved hepatic characteristics and increased metabolic capacity that will better reflect in vivo conditions. The newly developed 3D cell models will represent a promising tool for generating more predictive genotoxicity data for human exposure to various compounds and therefore accelerating development of new drugs and other products with a better safety and efficacy profile.

We believe that the hep3DGenTox project is an ideal opportunity to develop advanced physiologically more relevant hepatic 3D in vitro cell models that will bridge the gap between traditional 2D cell culture models in vitro and in vivo experiments in genetic toxicology. 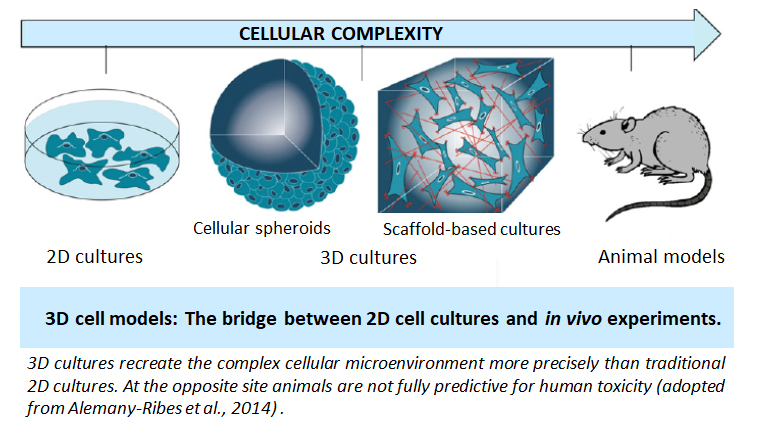 Relevance and potential impact of results
One of the main difficulties of the current regulatory strategy for genotoxicity testing of chemicals is a high rate of false positive results, which triggers unnecessary in vivo studies, hence generating undesirable implications for animal welfare. Moreover, the limitations of 2D in vitro systems and animal testing are related to high costs of the follow-up testing and delay of the product marketing that force the requirement for development of highly predictive in vitro assays that will be accepted by regulatory authorities. EU regulators and the US Food and Drug Administration are already of the opinion that the potential of 3D cell systems are a reliable option. The innovative 3D models in vitro have the potential to improve preclinical testing and thus accelerate preclinical development of new drugs with a better safety and efficacy profile. Therefore, new knowledge gained in the Project will be of significant relevance for future development of in vitro 3D test models as well as for better understanding and interpretation of toxicological results, which is important for the regulatory toxicology. In addition, the availability of better models with metabolically active cells and developed methodological approaches, will be applicable not only for routine testing but also for mechanistic toxicological studies, particularly for the investigations of hazards posed by exposure to mixtures of contaminants, which is currently one of the hottest scientific topics in toxicology and risk assessment for human and environmental health. Taken together, improved hepatic 3D cell models and their applicability for genotoxicity testing i s of particular regulatory and scientific importance for the safety assessment of human exposure to chemicals.

The advanced hepatic 3D cell models with improved metabolic capacity and long-term stability represent an important step forward in the field of genotoxicology. It can be expected that these advanced 3D cell models will play a critical role in drug development and safety assessment of chemicals with the goals: i) to improve prediction of in vivo genotoxicity and potential carcinogenicity; ii) support mechanistic understanding through ‘omic’ analysis in a more physiologically relevant test system then currently used 2D systems, iii) provide a basis for the safety assessment and quantification of toxicological risk and iv) significantly contribute to the reduction of animal use. Owing to their physiological, molecular, and histological phenotypes, coupled with their long-term stability, these models are receiving growing attention from academia and industry. They are already replacing animal experiments for the purpose of drug development, but will for sure become an indispensable tool also in human safety and risk assessment of various chemicals, which points out the relevance and importance of the hep3DGenTox Project.