Impact of environmental stress on mussel health and recruitment, and improvements in farming practices due to microplastics and climate changes

CRP "Our food, landscapes, and natural resources in 2022"

Impact of environmental stress on mussel health and recruitment, and improvements in farming practices due to microplastics and climate changes

Project partners: National Institute of Biology and Institute for Water of the Republic of Slovenia

Due to the overexploitation of fisheries resources, mariculture (aquaculture and shellfish farming) is an extremely important economic sector to compensate for the loss of fisheries. Global aquaculture production (inland and marine) has exceeded fisheries since 2012 (FAO; 2019). This makes aquaculture the fastest growing food production sector in the world. Research in recent years has focused on the causes of the decline in shellfish production in the EU. The main causes include: Shellfish diseases, harmful algal blooms, lack of juveniles in the wild, predators, environmental pollution and associated poor water quality, the effects of climate change (especially warming), low earnings as an economic cause and lack of space for shellfish farms. The latter is a problem in several European countries: Spain, Italy, Greece, Germany, Portugal, Slovenia, the UK and Ireland, due to the large number of offshore activities. In an analysis of the shellfish industry in the EU, which included Slovenia, the main weaknesses of the sector were identified as the low price of shellfish, the fragmentation of the sector, the lack of opportunities for expansion and the difficulties in obtaining permits. Threats to the sector are related to technology, as mussels are grown in extensive open systems and very limited control over environmental factors. The main threats identified were harmful algal blooms, weather disturbances due to climate change, pollution, diseases and predators. Climate change is triggering a number of impacts, such as rising sea temperatures, sea level rise, acidification, changes in the precipitation regime and thus salinity, and nutrient concentration and quality.

Since 2014, Slovenia has been conducting pilot monitoring of marine litter at the sea surface, on the seabed, in coastal sediments and in marine organisms (fish and shellfish). The analyses so far have shown the presence of micro-litter (including microplastics) in both fish and shellfish. Since many chemicals adhere to plastic waste and some chemicals accumulate in a large number of species, this exacerbates their negative effects on organisms. Since microplastics and their associated chemicals are also transferred through the food chain, the integrity of marine organisms intended for consumption is at risk. Microplastics interact with the toxic effects of other pollutants in the environment.

The aim of the project is to provide a baseline that will help shellfish farmers and decision makers to adapt their farming practises to the changing environment of the northern Adriatic Sea (Gulf of Trieste), which is highly exposed to various anthropogenic influences (sea warming, pollution). Therefore, we will:
- analyse existing datasets of environmental parameters (sea temperature, salinity, nutrient concentrations, dissolved oxygen and chlorophyll a).
-  analyse existing and obtain new data on microplastics in mussel beds and assess the impact of plastic infrastructure on mussel farms
- analyse the consequences of changes in phytoplankton communities important for mussels
- Analysis of the physiological status of mussels in mussel farms using biomarkers of stress and condition indices and monitoring of their recruitment
- Analysis of the effects of heat stress on mussels under experimental conditions
- Holistic evaluation of the results and recommendations for improving aquaculture practises under different scenarios of environmental stress. 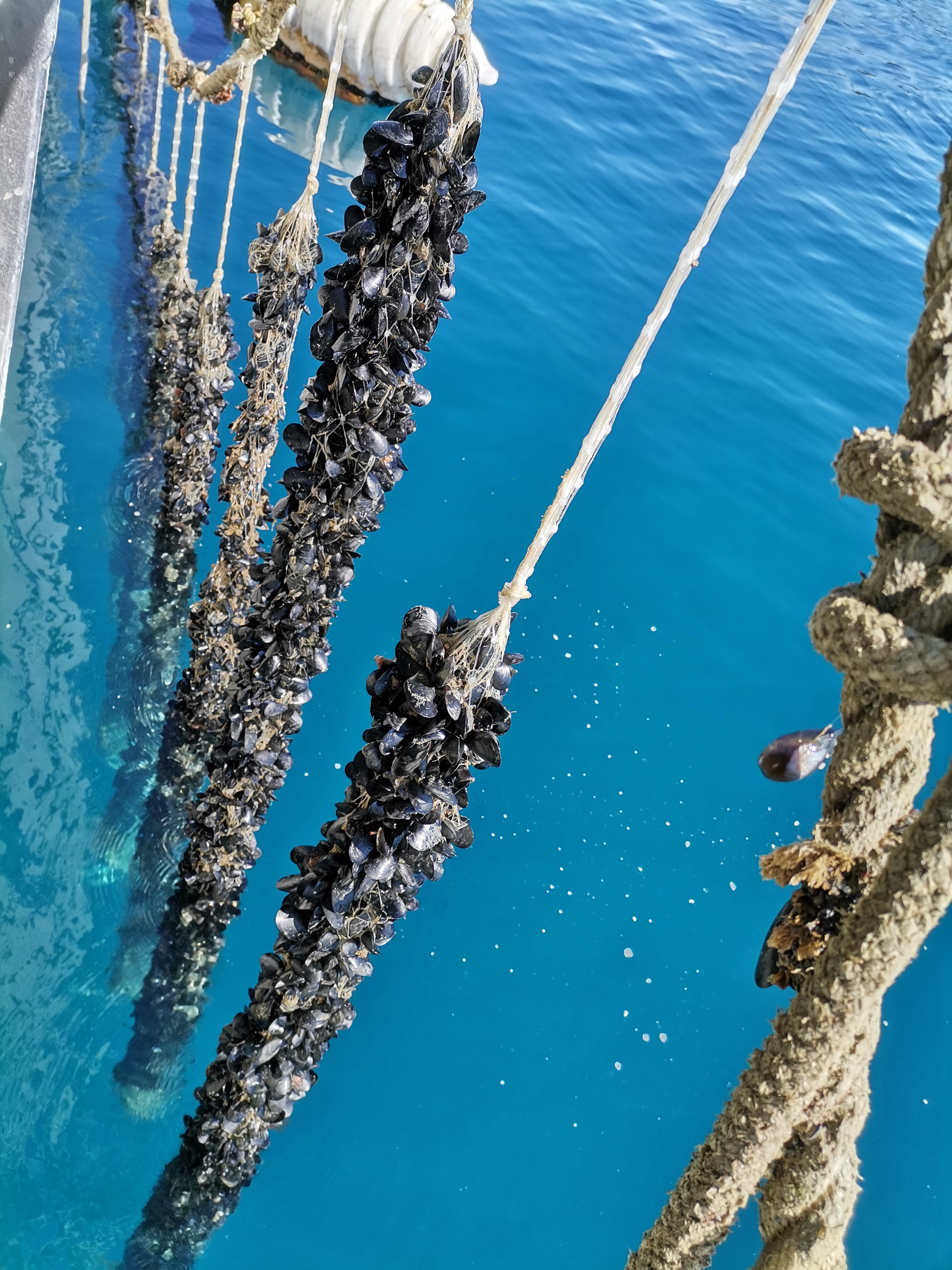